written by Juicing For Fitness

Anyone wanting to live a healthier lifestyle should own a juicer. These machines can do a variety of different functions that can help ensure you get the most nutrients out of the foods that you eat.

Masticating juicers such as the Omega J8006 Nutrition Center Juicer, come with strong motors to get the job done. However, it works at a speed of 80 rpms. The machine is quiet and carries a voltage rate of 110V. 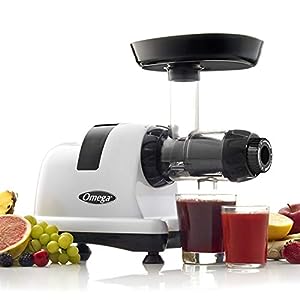 While that might seem like it’s not a high enough speed to work well at juicing, it is. Masticating juicers aren’t the same as centrifugal juicers which need the higher speed. But don’t make the mistake of believing that the lower speed means it will take longer to juice your recipes because that’s not the case.

Using a juicer with a lower speed works to keep the enzymes in the foods more intact. What this does is it works to keep oxidation at bay so that you can gain more vitamins and minerals from the foods that you juice.

Thanks to the lower oxidation, you’ll be able to keep the juices you make longer than what the competing brands allow. With this model, you can safely keep the juice stored for as long as 72 hours after you make it.

Plus, because it does work at a lower speed, you don’t end up having to battle with the foaming issues and clogging incidents are rare. This machine is a twofold juicer. When you put the food items into it, the juice is extracted.

With regular juicers that aren’t dual stage, that’s usually the end of the process. But this one presses the pulp again to make sure you get every drop of juice. Because of that, you end up with pulp that’s extremely dry.

Since the pulp is automatically pulled from the foods, you can keep on juicing until you complete what you set out to do. This juicer is one of the better ones that you can buy for juicing tough items such as wheatgrass and leafy green vegetables.

But it’s also good for both hard and soft fruits as well as for other vegetables. This model comes with pasta nozzles that you can use to make spaghetti and other types of noodles.

There’s also a homogenizer attachment. What this does is to allow you to make several different types of foods. Among those are things like baby food, frozen desserts and even delicious tasting peanut butter.

Because this machine comes with an attachment that can be used as a food processor, you’ll also have the ability to chop or mince different foods. The Omega J8006 even gives you the option to grind coffee.

How Juicing Can Lead To Weight Gain

Organic Juicing And Why You Should

Cleanse and Detoxify Your Body with Green Juicing

Green Juice For A Healthy Heart

How Juicing Can Lead To Weight Gain 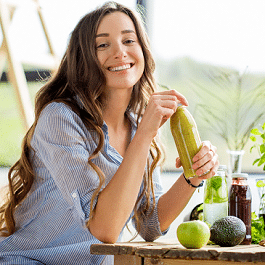 Hi! I'm Jill Wilson and I’m so happy to have you here. Please enjoy what we have to offer at our website, and here's to "Drink Smart, Exercise, and Live Well!"